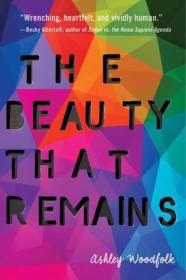 The Beauty That Remains by Ashley Woodfolk

Thanks so much to Netgalley and Delacorte Press for providing me this ARC in exchange for an honest review.

Trigger Warnings: Death of a sibling, death of a best friend, death of an ex-boyfriend, suicide, leukemia, alcoholism, mentions of drug dealing, marijuana use, death of a queer character.

Plot: Told from the perspective of three teenagers, all of whom have experienced the loss of a loved one. Autumn lost her best friend, Shay her twin sister, and Logan the boy he loved. They’re navigating grief each their own way, and are reunited by their love for one band’s music.

I often hear about how people find contemporary novels formulaic and clichéd, and while a lot of it boils down to taste, I think some it also depends on the kind of contemporary novels people are reaching out to read. For skeptics of the genre, I invite you to give Ashley Woodfolk’s debut YA novel a shot. It tackles grief in such a profound way while delving into the many complicated and flawed things that make us so human.

The three main characters, along with the secondary characters, are all linked to each other via their connections to a local indie band called Unraveling Lovely. Autumn’s best friend Tavia dies in a car accident while driving to a party, and Autumn is racked with guilt because she was supposed to accompany her to the party and chose not to at the last minute. Her coping mechanism involves spending all her time she can at Tavia’s house, particularly with Tavia’s brother Dante, and emailing her constantly. Her grief seems immeasurable and she doesn’t think anyone else’s, not even Dante’s, can even compare. Shay’s left ‘twinless’ after losing her sister Sasha, who’d succumbed to the leukemia she’d been suffering with since the age of 11. The twins, along with a couple of their friends run a music reviewing blog, and Sasha is constantly reminded of Shay from every queued blog post, and every time someone else, including their mother, looks at her. Like Autumn, she’s in place where she feels nobody can possibly understand what she’s going through. Logan struggles with grief and guilt over the loss of his ex-boyfriend Bram, and blames himself for some things he said to him as their relationship was ending. He feels responsible and struggles with a lot of “what ifs”, wondering if he’d contributed to Bram’s depression and consequent death by suicide. Logan’s depression lead him to alcoholism that resulted in the breaking up of Unraveling Lovely, of which he was a member. Now, he harbors resentment for Bram’s girlfriend Yara and leans on watching Bram’s vlogs as he grieves for the person he loves.

The three teens are narrators of their own stories, and while their losses are separate, their grief brings them together. As the stories develop, we’re shown how their lives overlap and intersect. They each lean on their love for music, even when sometimes it doesn’t seem enough. This is a poignant thread that ties together all of them and the book itself, as the characters otherwise don’t have anything else holding them together. However, the story in itself such an emotional and captivating one, and I think these connections, fragile as they are, just speak to how grieving can be both an individual and universal experience all at once.

The writing style in itself is pretty simplistic- lots of short sentences with strong, distinguishable narrators. I thought this worked well for a story that was fraught with so many emotions and the writing didn’t distract from that. In the end, you’re not left with characters that are completely healed with all their issues resolved and closure experienced, rather, you’re shown the significant effects of the tiny steps taken towards the beginnings of their healing process, with the help of good and necessary support systems. These strong themes of love, loss, pain, and hope will surely resonate with the book’s target audience, many of whom need books like these to feel a little less alone as they navigate a complicated world and tumultuous emotional spaces.

Overall, a phenomenally strong debut offering a perspective on grief that stays with you even after you’ve finished reading the book. If you’ve known me a while you know that I inhale stories that tackle grief, loss, and pain, especially realistic stories, so this book was tailor-made for me and has officially made it high up the favorites-of-2018 list. Fans of Adam Silvera and Nina LaCour, consider this me shoving this book in your hands.

Speed reading aficionado. Unapologetic book pusher. Point me to the nearest bookshelf. My blog is dedicated exclusively to supporting and promoting marginalized voices. Pronouns: They/them View all posts by Janani @ The Shrinkette

2 thoughts on “ARC Review: The Beauty That Remains by Ashley Woodfolk”