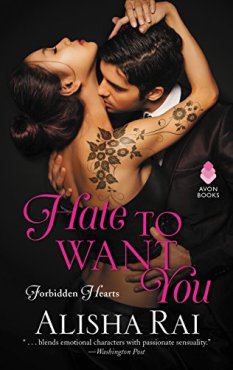 Hate To Want You (Forbidden Hearts #1) by Alisha Rai

Plot: Every year on her birthday, Livvie Kane and Nico Chandler would hook up for just one night. Nobody else knows, because of the infamous falling out between the Kanes and the Chandlers. So when Livvie returns to their hometown to sort things out with her family, Nico is absolutely thrown for a loop. Can they let go of their history and be together, or has the family feud gone too deep for them to turn things around?

I love a good angst-filled romance, and Alisha Rai delivers that with the first book of the series. The tension between the characters and just from the plot kept me up all night reading this book. Written from perspectives of both the main characters, you can feel their turmoil for each other as well as their families. Livvy is hella feisty and sexy and a talented tattoo artist who’s all heart, Nico is a businessman who is typically calm, collected, loyal, and only Livvy can get under his skin. The flashback scenes of the budding romance between a young Livvy and Nico made me swoon and ache, and just the banter between the two made me cackle; Livvy makes Nico want to both kiss her and kill her at the same time, which I simply adored. Outside of the romance, Alisha skillfully introduces a plethora of secondary characters and we get to see their dynamics with both Livvy and Nico. These characters and relationships were also extremely well-developed and multi-layered, which gave this book so much depth along with being a smoking hot romance. Totally fits the brief of a forbidden romance with a family rivalry trope.

Wrong To Need You (Forbidden Hearts #2) by Alisha Rai

Plot: Sadia Ahmed is the owner of Kane’s Café, which she inherited when her husband Paul died in a tragic accident. When her former brother-in-law Jackson Kane returns to town ten years after he ran away when accused of a crime he didn’t commit, she’s unable to shake her feelings for him. On his part, Jackson realizes he’s still helpless to stay away from the one woman he’s always loved. When she agrees to let him help her out at the café, Sadia realizes that her childhood best friend has grown up into an irresistible man. Will they, won’t they?

Oh. My. GOD. After HATE TO WANT YOU, I was sure Alisha was setting herself up for failure, because there was no way a follow-up was ever going to be as good. She proved me wrong by writing a second book that was somehow even better than the first one. This one is hands-down my favorite of the series. I was a little hesitant about the brother’s ex trope, but she handled it perfectly. Also, allow me to gush about Jackson for just one minute. Seriously, give me all the broody introverts always and forever. He’s shy, he cooks, he doesn’t talk a lot, and he’s downright sexy- sheer perfection. I loved their chemistry, I loved the angst and turmoil Sadia was going through about having feelings for her former best-friend-turned-brother-in-law, and her son Kareem was just pure joy and comfort on the page. Sadia’s character is beautifully developed- as a sex positive bisexual woman, as a daughter in a large family with conservative parents and delightful, caring siblings, as a mother, and as a lover. She and Jackson are a perfect match. In addition to all of this, we learn more about the Kanes and the Chandlers, so it’s not like the family drama is a one-and-done thing in book one. This book is all about second chances, and by god, it delivers that, with a gigantic helping of consensual, sex-positive, and super hot romance.

Hurts To Love You (Forbidden Hearts #3) by Alisha Rai

Thanks so much to Avon Books and Edelweiss for an advanced reader’s copy of this book.

Plot: In the final installment of this series, we meet Evangeline Chandler and Gabriel Hunter. She’s the heiress to the Chandler fortune and sibling of the overprotective Nicholas Chandler, he’s the tattoo artist boss of Livvy Kane, and son of the Kane family’s former housekeeper. He’s not supposed to be attracted to his friend’s sister, and she’s not supposed to nurse a lifelong crush for the help. However, will respectability and responsibility stand a chance when they’re forced to spend time together and sparks fly?

This book is a fitting ending to the series. She’s a good girl gone bad, he’s thrown caution to the wind in spite of his deep, dark secret. The chemistry is palpable and tender between these two. Eve clearly has a lot of issues and complexes thanks to the men in her family, and I absolutely love how she’s come into her own in this book, going from someone who strictly toes the line to a confident, outspoken person who can stand up to the men in her life, even the ones that have her best interests at heart. Gabe is clearly going through a lot of pain, but is still a wonderful human all-around. They’re also in the middle of a wedding, which means you get to see a lot of our favorite characters from our first two books. And just when you thought you’d discovered everything you needed to about the Kanes and the Chandlers, more secrets are revealed that absolutely shake up both families.

Alisha Rai delivers again. In just one series she’s managed to deliver three completely different types of forbidden romances, with such diverse characters. Also, hurray for POC romances. The Kanes are Hawaiian-Japanese, Sadia is a bisexual Muslim, Livvy and Jackson’s aunt Maile is a queer WOC, and Gabe is multiracial with an adoptive Black mom and sister (who is a badass billionaire boss, and I hope Alisha writes a spin-off book about Rhiannon sometime in the future). The books all prioritize consent. are super sex-positive, and especially don’t fetishize WOC and/or queer women. Let’s be real: Alisha knows how to write hot books. The sex scenes left me weak at the knees, and I was especially glad that none of the male protagonists had moments of being insecure about their masculinity or whatever when they were with assertive women. All in all, a fantastic series, and definitely her best one yet. I’m so ready to keep reading her work.